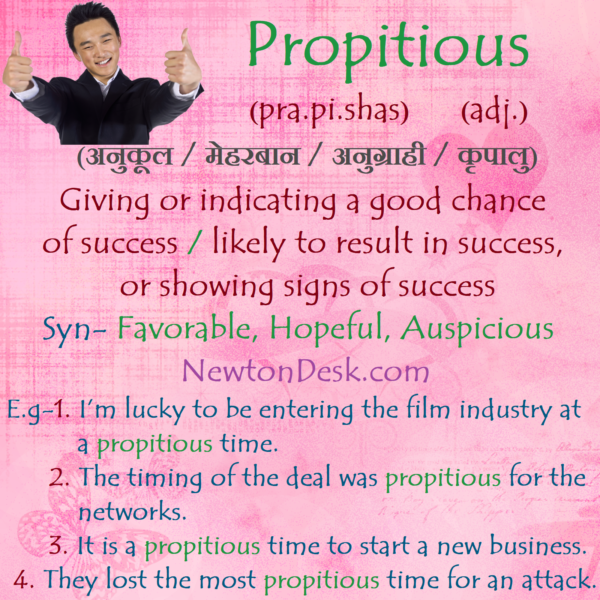 Meaning in English – Giving or indicating a good chance of success / likely to result in success, or showing signs of success

E.g-1. The timing was propitious; India’s economy grew by 8% a year on average in that decade.

2. He said it was an “extremely propitious period” to be “female and from an ethnic background and preferably both”.

3. It was a propitious moment and I immediately knew I was meant to care for him.

4. Japanese pay fortunetellers to pick lucky names for their babies or propitious dates for weddings and funerals.

5. I’m lucky to be entering the film industry at a propitious time.

6. The timing of the deal was propitious for the networks.

7. If some of its elements seem propitious for drama, the resulting play disappoints.

8. When a president is in crisis, it is usually a propitious time for political opponents to pounce.

9. The signs are propitious for a diplomatic tilt toward the United States.

10. Population density is much higher here, and the geology is much less propitious.

11. It is a propitious time to start a new business.

12. They lost the most propitious time for an attack.