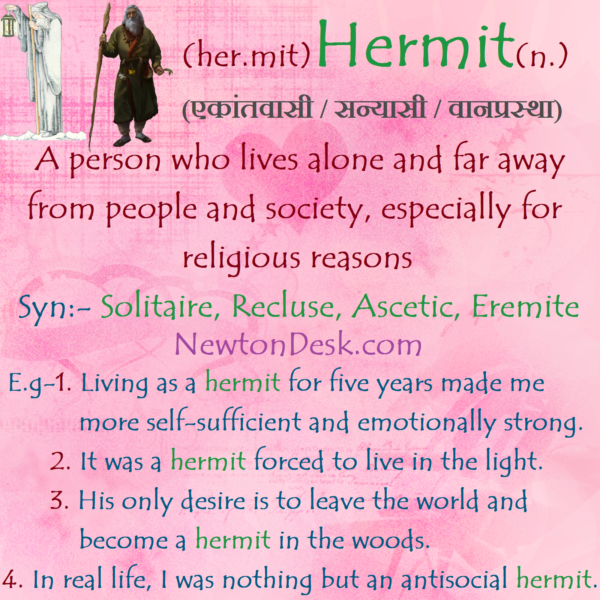 Hermit Meaning – A Person Who Lives Alone And Away From Society

Meaning in English – A person who lives alone and far away from people and society, especially for religious reasons. / someone who chooses to live alone or spend most of their time alone

E.g-1. She says many people think being a hermit is selfish.

2. It was a hermit forced to live in the light.

3. North Korea is one of the most brutal dictatorships in the world, a hermit kingdom ruled by a fanatical and paranoid regime.

4. He was cool with it 3 weeks ago and now is literally being a hermit.

5. In real life, I was nothing but an antisocial hermit.

6. Bob was a hermit who nonetheless stayed in really good touch with many members of our family.

7. In Hindu philosophy, all humans ideally mature in to hermits.

8. His only desire is to leave the world and become a hermit in the woods.

9. In ancient China, hermits were shamans, herbalists and diviners.

11. Living as a hermit for five years made me more self-sufficient and emotionally strong.

12. She said “You’re a hermit but you’re missing out on some great parties.”