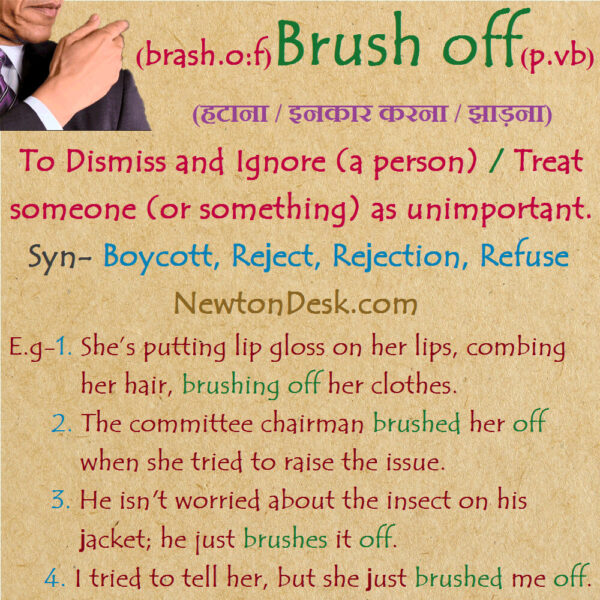 Brush Off Meaning – Treat Someone (or Something) As Unimportant

To Dismiss and Ignore (a person) / to refuse to listen to someone, or to not accept that something might be true or important / Treat someone (or something) as unimportant.

E.g-1. She’s putting lip gloss on her lips, combing her hair, brushing off her clothes.

2. If you get a little too heavy-handed, brush off the excess flour or sugar.

3. He brushed off any concerns about women being on the other end of some of those stupid things.

4. My husband quickly brushed off any hesitation or fearfulness I expressed.

5. She brushed off her fingers and put one hand under my chin.

6. He brushed off charges of corruption against his allies, who were not prosecuted.

7. She tried to tell on him but was brushed off.

8. He brushed off the criticisms directed at him.

9. Most of this behavior I typically brush off and forget.

10. I want to suggest it in a way that they can’t brush off easily.

11. The committee chairman brushed her off when she tried to raise the issue.

13. When i tried to talk to her about it she just brushed me off.

14. He isn’t worried about the insect on his jacket; he just brushes it off.

15. I wanted to keep in touch, but when i called him he give me the brush off.

Previous: Break Off Meaning – To Separate Part Of Something From The Whole
Next: Buy Off Meaning – Pay To Get Rid Of A Claim or Opposition