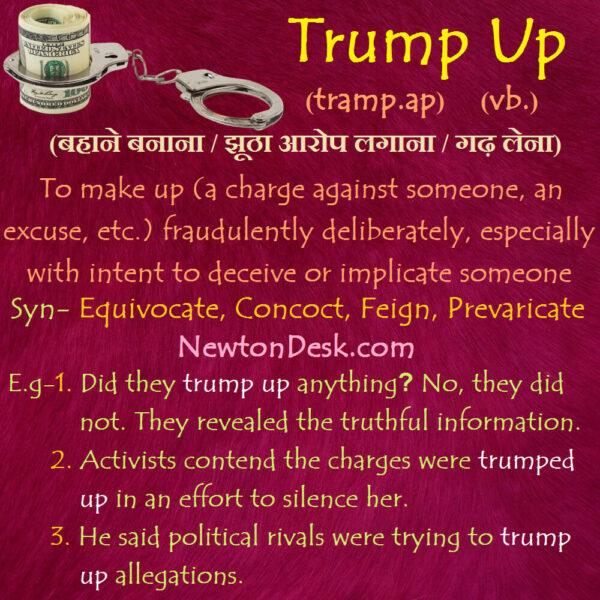 Trump Up Meaning – To Make Up A Charge Against Someone Fraudulently

in Newton Desk, Words and Expressions Leave a comment 6

To devise, concoct or make up (a charge against someone, an excuse, information etc.) fraudulently, especially with intent to deceive or implicate someone. / to deliberately make up information that connects someone with a crime.

E.g-1. The activist denied the charges, saying they were trumped up.

2. He says the charges against him are trumped up.

3. Alexei Navalny says the charges were trumped up to prevent him challenging Putin for the presidency.

4. The crisis with North Korea may appear trumped up.

5. Did they trump up anything? No, they did not. They revealed the truthful information.

6. Human Rights said they were jailed on “trumped up terrorism charges”

7. He said political rivals were trying to trump up allegations.

8. He also thinks allegations that drone strikes kill civilians are trumped up.

9. Activists contend the charges were trumped up in an effort to silence her.