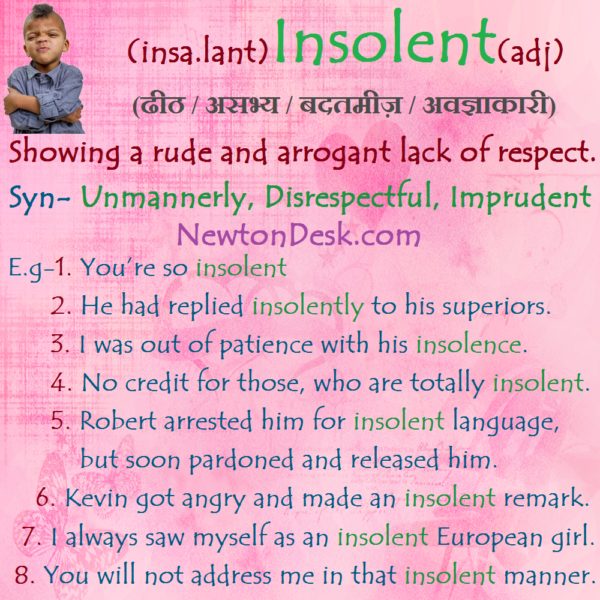 Insolent Meaning – A Rude And Showing Lack of Respect.

Showing a rude and arrogant lack of respect.

E.g-1. I was a friend to wild animals and an enemy of insolent men.

3. Kevin got angry and made an insolents remark.

4. You insolents girl. I don’t want to hear another word. We are the ones who decide what’s best for you. Is that clear?

5. This insolents popularity is not to everybody’s liking, especially within the government.

6. He entered the house and “behaved in the most insolents manner to us.”

7. I always saw myself as an insolents European girl.

8. No credit for those, who are totally insolent.

9. You will not address me in that insolents manner.

10. Their eyebrows were penciled thick, and they wore an insolent pout.

11. Robert arrested him for insolent language, but soon pardoned and released him.

12. I sat down and wrote a most insolent letter to Barrington.

13. He had replied insolently to his superiors.

14. That’s enough of your insolence, boy!

15. I was out of patience with his insolence.