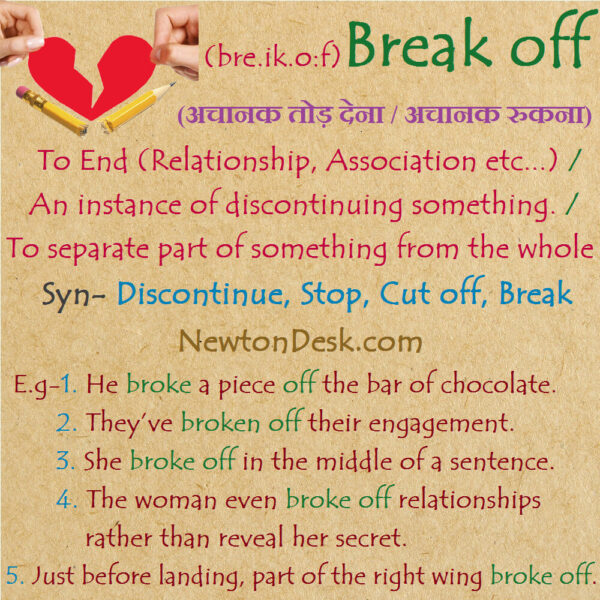 Break Off Meaning – To Separate Part Of Something From The Whole

To sever or Detach / To End (Relationship, Association etc…) / To stop Abruptly / An instance of discontinuing something. / To separate part of something from the whole

E.g-1. He broke a piece off the bar of chocolate.

2. The new section has broken off from the established church.

3. They’ve broken off their engagement.

4. The governments have broken off diplomatic relations.

5. She broke off in the middle of a sentence.

6. Just before landing, part of the right wing broke off.

7. After months of negotiation, the administration broke off talks with California in January.

8. The smaller states broke off and the empire crumbled.

9. Suddenly one of the prisoners near the end of the line broke off and ran.

10. Lady Gaga and fiancé Christian Carino broke off their engagement.

11. He often breaks off in his speech and stares in front of him.

12. Several panels on the limestone wall broke off.

13. The woman even broke off relationships rather than reveal her secret.

Previous: Cry As Much As You Want To By Selena Gomez
Next: Brush Off Meaning – Treat Someone (or Something) As Unimportant