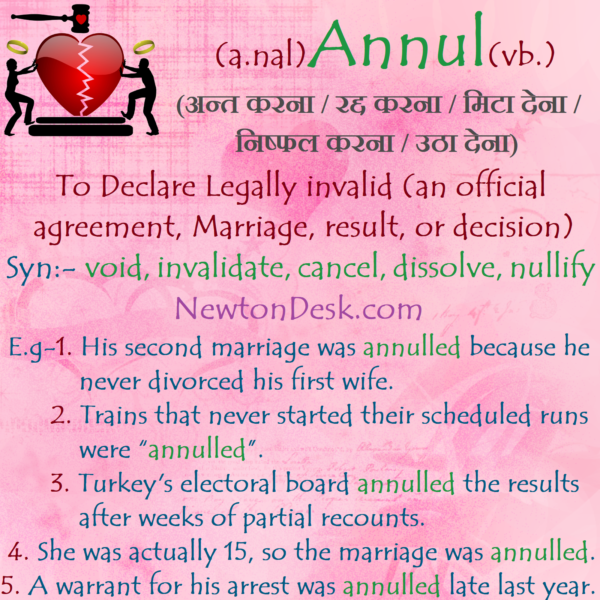 Meaning in English – to Declare or make Legally invalid (an official agreement, Marriage, election, result, or decision). / cancel officially / to announce officially a law, marriage, or other contracts as no longer existing.

E.g-1. His second marriage was annulled because he never divorced his first wife.

2. The generals annulled all previous deals and threatened to hold elections in nine months.

3. Turkey’s electoral board annulled the results after weeks of partial recounts.

4. An official presidential decree on Wednesday annulled her appointment.

5. The first marriage was annulled and the second and third ended in divorce.

6. A warrant for his arrest was annulled late last year.

7. She was actually 15, so the marriage was annulled.

8. He is now seeking to annul the marriage and invalidate the agreement.

9. Trains that never started their scheduled runs were “annulled.”

10. He annulled the registrations with a stroke of the pen.

11. Court records show the marriage was annulled in October at Misty Spann’s request on grounds of fraud and illegality.

Previous: Maturity Is Understanding Small Things
Next: Decree Meaning – An Official Order That Has The Force Of Law